Ship Your Items Now! Get Paid in 24 Hours

The Rise of the Man-gagement ring.

On March 24, my best friend Melissa and her husband-to-be, Gavin, stood together at the altar, surrounded by one hundred loved ones.  It was a traditional ceremony; the two Argentineans smiled blissfully in a sea of white and blue. Sunlight bounced off Melissa’s gorgeous 2 carat princess cut diamond ring on her left hand. But wait…; there was small detail that set Melissa and Gavin’s ceremony apart from others. When it came to exchanging wedding bands with one another, Gavin was already wearing a ring.

Well… if you keep up with celebrity news, you probably heard or noticed that Johnny Depp has a rock on his left finger! (Yes ladies, he’s officially taken…) 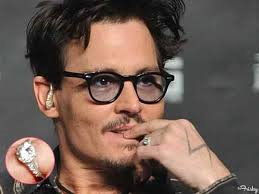 Yup! You read that correct, and now…introducing the “Man-gagement ring.”

You’d think that “mangagement rings” is a completely new idea… but it’s not.  According to some sources, to exactly pinpoint the origin is difficult but it’s definitely predates the 21st century.

In 1926, jewelers tried to popularize the concept but companies like L. Bamburger & Co., (rebranded as Macy’s) joined together for a cooperative advertising campaign. The ads featured a black and white photo of a man’s left hand, a cigarette resting between the first two fingers and a large rock flashing on the fourth. The ring even had ultra-macho names: THE PILOT, THE STAG, and THE MASTER.  But these campaigns were unable to overcome the ingrained femininity of the symbol and the movement flopped.

It’s the women who wears the ring to let the world know she was “engaged” to her man, and it’s the woman who took her man’s last name.  Moreover, a groom’s wedding band wasn’t a given until the 1940’s and 1950’s. After World War II, there was an idea of “togetherness” and people were experiencing post war prosperity, and the lavish white wedding fit into that ideal. Therefore, jewelers promoted weddings as a symbol of the American Dream.

Some people think that the trend of management rings are probably re-introduced because of same sex marriage; and it has. The spreading legalization of same-sex marriage has created a new demand in the industry. In Chicago alone, about half a dozen jewelry stores cater specifically to same sex couple engagement and “man-gagement” rings.

It’s known as a tradition in our society that when a couple is ready to tie the knot, a showmanship of commitment is worn on the left finger. And therefore, instead of calling an engagement ring for men, it can technically have the term “man-gagement ring.”

Through the years, customs and traditions have changed. When asking for a hand in marriage, men were the ones who got down on one knee and gave his dream woman a ring to show the world that she is taken. But now, there are women who ask men out on dates, and the whole double standard gets pushed over a little.

In 1977, only 48% of the public favored a household where couples shared domestic responsibilities. By 2010, that number jumped to 62%; and because relationships and marriages are more equal than ever, nearly 80% of young women (under 30) support equal marriage with dual earners and share responsibilities. So… if two people can wear the pants in the relationships, they both sure can wear the ring!

Even jewelry stores have reported that women are starting to come into the stores looking for a ring for the man; one of the biggest jewelry store in New York City, Kwiat, has a various selection for “man-gagement” rings!

So exactly what does a “man-gagement ring” look like?  It’s less expensive than a woman’s engagement rings but a bit fancier than a man’s wedding band. 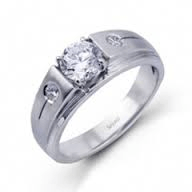 In 2009, a British jeweler H. Samuel designed the Tioro ring which is a titanium ring about a half centimeter wide with embedded with tiny diamonds or two. So while women’s engagement rings are abundant, men have limited options- gold, platinum, and titanium bands between five and seven millimeters seem standard. The aesthetics are simpler, but the gesture itself is significant.

Right now, about 5% of men wear “man-gagement rings” now. “The guys who are doing it, are digging it,” says Calla Gold who is a jeweler in California. “It’s one more memory to add to the quiver of stories that make for a happy married life.”

So the rise of man-gagement is getting certainly some-what noticed. But what will it really take for the management rings to really enter the mainstream? Well… last year… the Robbin Brothers, a jewelry chain specializing in engagement sparklers, surveyed about 800 respondents about their attitude toward long standing marriage customs. The results: about 67% of the men polled are “open” to wearing an engagement ring. But because management rings aren’t a cultural staple, women are not prompt to buy them.

Basically, if the jewelry industry wants to sell more man-gagement rings, it may need to run ads coaxing women to pop the question.

Still, men are still seen as the main people who are supposed to propose. That will continue to hinder the acceptance of a new ritual good but until that acceptance comes, there is still a small and proud remaining number of growing minority.

Therefore ladies, if you’re bold enough to pop the question to your man & you man is open to the idea of wearing a “man-gagement” ring to show off the world he’s taken and committed, then why not!